No matter what size of growing space you have, outdoors or indoors, it’s worth experimenting, even if it’s just for the fun of it. There are varieties of carrots, turnips and beetroot all suitable for growing in a window box. I have tried all three of them, and if that was all I was growing, I would have dedicated more time to keep a watchful eye over them. I grew Paris Market, a little, round, bite-sized carrot. Chioggia beetroot, equally small, round with alternate rings of red and cream and this year’s tiny root vegetable was Snowball turnip. 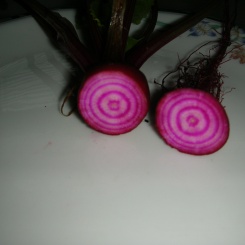 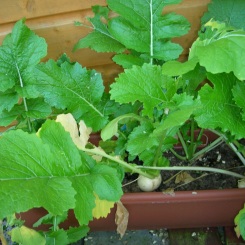 I was quite happy with the outcome of the turnips, they had plenty lush green folliage (also edible) and seemed to be thriving – until a few days ago. Those healthy, green leaves had lost the will to live, they just lay there, limp and pale. To add insult to injury, the leaves were now riddled with small holes. I couldn’t see what caused the damage but decided I would be better to lift the turnips rather than lose them. I took them into the greenhouse to clean the soil off the roots and there it was, a tiny, white worm which had popped out, probably wondering what was happening to it’s source of living. I would like to say it was very cute, white with tiny black eyes, but it was in my turnip and I had come over all protective of it. It wasn’t very big, but it was mine, and it had an intruder.

Of course it has a Latin name but the turnip fly larvae does not deserve to be known as Delia (Delia radicum to be exact). Slightly smaller than the housefly, the turnip fly lays it’s eggs close to plants, and it’s maggots feed on the roots of the plants. They are not too fussy and will invade carrots (as the carrot fly), cabbage (as the cabbage fly), or any other root it takes a liking to, adding ‘root fly’ to it’s list of aliases.

Still determined to claim what was mine, I cut off any signs of activity and was left with approximately five centimetres square of usable turnip, which I steamed with some of my beans ‘Karmazin’ and courgettes ‘Midnight’. They were delicious, with the added smugness that at least one (or two) little pests had been denied a future of devastating root crops.

3 thoughts on “A Fly Named Delia”