Long before we had pharmacies, we had apothecaries and herbalists. No doubt some patients would not have survived the lotions and potions administered in days of yore. That may have been the only test there was, if it wasn’t poisonous, you lived – if it was, you died. I’ve always had some herbs on hand though never really put them to good use.

An old ceramic sink was cleared out and refilled with fresh compost and that was where the onions and garlic were going but of course I changed my mind. Originally my neighbour’s dog was managing to tear round the garden like a bulldozer, she’s only small but was bred for work on the fells so is quite a sturdy wee dog and a visit from her would send my plant pots flying, so until I found a forever home for some of the plants, I put them in their pots, in the sink. They seemed to be happy and healthy and if they needed to stretch their little roots, there was always the compost in it for them. 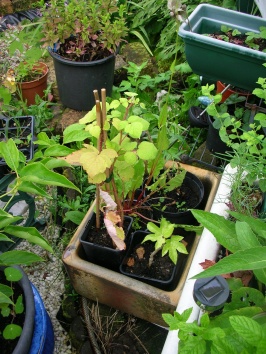 I have some neglected containers elsewhere with Marjoram, Oregano, Silver Thyme, Pot Marjoram, Sage etc. Many of the herbs are familiar for culinary uses and are well enough known.

Sage as well as using it with onion for a stuffing, try rubbing a sage leaf on your teeth, it makes an excellent whitener.

Young shoots of Amaranth can be used as a vegetable and the seeds are supposed to be similar to quinoa. They are too healthy to discard and if you don’t like the taste of quinoa, try mixing them with porridge for breakfast.

Comfrey is a wonder herb and you might wonder just what it can’t do. It draws minerals out of the soil into the roots and leaves, it’s great for compost and comfrey tea (liquid fertiliser), animals eat it, a wound healer and mends fractures apparently (once known as knit-bone) and of course amongst it’s many other uses, it makes good comfrey fritters.

Mints:  Moroccan: A nice refreshing tea and a plant worthy of a nice planter to display it. Garden Mint: This has been kept in a pot for years, it’s probably long past time for splitting it, but it does need to be contained as it can be a bit invasive. Chocolate Peppermint: It’s darker leaves have quite a strong chocolate mint smell, it has been suggested that it’s best used for desserts or tea. The leaves can be coated in chocolate, set in the fridge and eaten, served with ice cream or used in cake decoration.

Lemon Balm: According to the Romans, it was the elixir of life. It has a long list of culinary and medicinal properties, from serving with ice cream to assisting in relieving anxiety, depression, improves circulation, stomach disorders and nausea.

Fennel: A strong aniseed taste, it can be used in cooking but is also a medicinal herb used for digestive disorders. All parts of it can be used even the seeds can be sprouted to add to salads.

Foxglove: (Digitalis) All parts are poisonous but this is the plant used by pharmaceutical manufacturers to provide medication for heart problems. Some foxgloves can be very tall and providing they can withstand the wind and weather, they are quite stunning. They also a favourite with insects and bees.

Valerian: It’s roots are supposed to provide a sedative for sleep disorde

rs. Whilst it may have some effect, there is apparently not enough evidence to prove it as being as strong as it has been supposed to be. Contrary to some belief, Valerian has nothing to do with Valium which has a chemical base and not a herbal one. It does have a long list of conditions it does help though, and it’s extracts are used in food colouring and flavouring.

Pot Marigold: (Calendula officinalis) It is known as several names and I’ve mentioned it before as a companion plant. Many will recognise the benefits of Calendula cream. it’s another multi-purpose plant with healing and soothing properties. The petals can be used in salad or used as a colourant for rice. If you have any petals left, you can scatter them under your bed to protect you and give you pleasant dreams.

Pipiche: mentioned also elsewhere but so tasty, it’s worthy of another mention. It’s tarragon-like leaves are covered in oil grands which gives them their unusual flavour and makes essential oils. The petal-less blue flowers are unusual.

(Citrus bergamia) best known for flavouring Earl Grey tea and if you need your mood enhanced and confidence built, this is for you. A cup of bergamont tea and you will uplifted and relaxed.

Borage; (Borago officinalis) I probably shouldn’t include this herb in this year’s list as my borage seeds didn’t germinate but it’s such a pretty herb, I think even the attempt to grow it should qualify it for the list. Well known for using it’s beautiful blue flowers as a decoration in salads and freezing them in ice cubes for summer drinks.

ie, garderobe, Our Lord’s wood, maid’s ruin, garden sagebrush, European sage, sitherwood and lemon plant. This is quite a long list of common names for Artemisia abrotanum, but I know it as Southern Wormwood.   For years it was neglected and no more than a few feathery fronds on a stick. This year I re-potted it and put it in the ‘nursery’ with the other herbs whilst wondering where to put it permanently and it seems to have come to life again.

A strong camphor smell, it was used originally to repel moths and insects from clothes as the French name of ‘garderobe’ (clothes preserver) implies. It was also used as a ‘strewing herb’ a much needed aid to disguise the smell of the great unwashed in medieval times. Bathing was not popular in Merry ol’ England and perhaps many other countries as well so I wonder why it never occurred to folks that it would be easier washing than it would be searching for aromatic herbs to hide their smelly bodies. It’s also apparently the reason for the bridal bouquet being carried although weddings were popular in May because it would have been around the time for their annual bath. It also makes you wonder if ‘maid’s ruin’ was aptly named for a reason!

Queen Elizabeth I, favoured Meadowsweet as a ‘strewing herb’ for her chamber, so obviously pongy people and fleas were no strangers in the Royal households either. The lady’s headgear I know as a ‘mutch’ was a close fitting linen bonnet. This type of headgear was worn by ladies to stop the lice falling into their food. The Romans invented central heating and baths so you would have thought, when they invaded Britain they would encouraged the natives to be a bit more hygienic, instead of leaving it for another 2,000 years for them to realise they needed it.

Southern Wormwood can be used as a culinary herb but it is doing a good job dispelling moths, fleas and unwanted odours. Period dramas don’t show the real life in the good ol’ days that’s for sure.

Why not visit my other blog  Grannysattic

3 thoughts on “Lotions And Potions”