In the main, I was pleased with my edible plant growing last year, especially when I tried some plants I never heard of before. Most were easily grown and I did get to see the results eventually. So confident was I, that I could have a similar success this year and I was even more ambitious. I didn’t plan enough, I took part in a seed swap and the offers were too good to miss. I found germination in coir worked fine. I tested some seeds in vermiculite and diluted hydrogen peroxide with a good deal of success so when it all started to go wrong, one by one my mistakes were uncovered.

Coir is fairly clean, lightweight material to work with, seeds germinated well but unless you can pot them on at the right time, with the lack of nutrients, nothing much happens. My first priority has always been the tomatoes so they got my attention first although adding to the problem was our cold spring. Nothing moved at all. I bring the seeds on in a heated windowsill propagator until they start to grow, then I turn the propagator heat off and they are still happy to live on a sunny windowsill. Once their first true leaves start to appear then it’s time to pot them on. A few more days indoors and it’s time to move them to the unheated greenhouse. Winter came in spring this year so bright sunshine in daytime, severe frost at night and although it didn’t kill the plants in the greenhouse, nothing made any effort to grow. Plants I had moved outdoors were cut down by the frost.

I do try to use a good quality compost at the first potting-on stage. The spent coir gets added to any other compost reclaimed from pots. My unscientific decision is this is not a good idea for smaller pots, there just isn’t enough nutrients and the coir only bulks it out, although it works well with larger pots with added nutrients.

Squash takes up a lot of room which I don’t have but even sowing three seeds of each variety in case only one seed germinates, didn’t work too well since they all germinated and although I moved them all outside fairly early, they are all still alive and spreading themselves around quite happily. I didn’t need the Jack-be-Little, Baby Bear or Hooligan squash but being some of the mini varieties, I thought it would amuse my neighb

our’s grandchildren. I had already taken seeds from a mini variety I bought last year and they too germinated well. Then when I heard about Kiwano aka Jelly Melon, I had to try that too – then there was the Tromba di Albenga and Crookneck squash, the courgettes. The gold variety of courgette just disappeared completely.

Basil has been a big disappointment, the only one making an effort to do anything is Red Rubin basil, although I did sow other varieties a little bit later but it will be some time before I know whether or not the seeds have been persuaded to germinate. I sowed seeds for tree spinach and got a carrot and many seeds have lost their labels again this year. 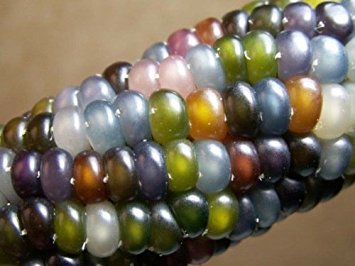 I thought I would try strawberry popcorn as well as glass gem corn. All germinated well and because I didn’t get around to potting them on early enough they are a little bit behind with growth. None of them are helped by the slugs and snails helping themselves. These gastropods are quick learners, they haven’t made themselves known often enough for me to catch them, but nibbling leaves is not enough, they seem to prefer munching through the stems and I need to keep a stock of strawberry popcorn to replace the ones they’ve eaten.

In the flowering section, the poached egg plant and phacelia, both planted especially for the bees are showing little signs of growing.

The balsam, purely decorative, is very unhealthy and sad looking but worst of all are the tropical polianthes bulbs I bought with the expectation of a hot summer. I think they have rotted in the tub. The beautiful perfumed Hawiian flower is now unlikely to grace the Scottish air.