I like sweet pickled beetroot and for many years,

I didn’t know there were so many varieties of beetroot available. Having been given a couple of very large beetroots, I wondered how best to cook and preserve them. The biggest one was a Chioggia beetroot with beautiful rings of red and white. It’s much sweeter and not so earthy as the dark red beetroot we are familiar with.

Although it was advised to pick chioggia when it was still quite small. I had grown it before but perhaps it was too small when I harvested mine.

I checked with various forums online for ideas and I was surprised when several people didn’t like the stripey pickled beet, they said it had lost its colour and didn’t look appetising. I was going to boil my beetroot but my pot wasn’t big enough, so I went along with one recommendation to roast it. 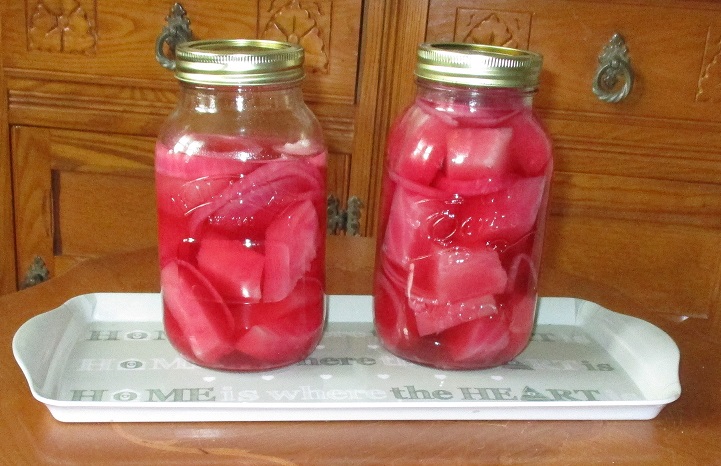 That beautiful red and white beetroot had now been bleached and looked quite unappetising. I trimmed the outer layer off, cut it in chunks and pickled it with some red onion rings in a lighter version of the sweet pickling vinegar. The onion rings contributed to the pink colouring.

The second beetroot is an unknown variety, only unknown because it didn’t have a label. It is in a sweet pickling vinegar and I also added red onion rings to it. It will be a day or two before that is ready for eating.

I didn’t think I wanted to wait for the pink so tried some, fresh from the jar. It looked a bit like chunks of watermelon but it did have a slight, sweet beetroot taste through the mildly acidic liquid. In this case the beetroot was too big not to preserve but flavour wise, I still think it’s too nice not to eat fresh. The pickled pink beet will look really attractive in a salad.