I’ve never been overly fond of spiders, in fact they are only one of many insects I don’t care to handle. I try not to kill things, unless they overdo invading my space but generally, I will remove them from the premises and give them a chance to survive elsewhere. The teeny tiny little ‘money’ spiders are not a problem, they can climb onto my hand and I am happy to transfer them to a safe place, but the house spider is a different matter. I live in an old building and older buildings seem to be prone to have generations of insect families living in the same place.

is down to a ‘T’ now. Now and again, when watching TV, I get the glimpse of movement. It seems to sense me turning my head and thinks if it stops dead in it’s tracks I won’t see it but you can’t miss it, it’s huge, black and quite butch. By the time I try to find a way of dealing with it, it has taken refuge again.

In spite of my generosity by not jumping on them, throwing something at them etc., they seem to still think it’s OK to set up house with me. They taunt me. Their webs do appear overnight and one had the cheek to put one across my bedroom door so from the time I went to bed to the time I got up, a suspension bridge was built across the opening. Then the darker corners seem to be more favoured when it comes to building something resembling a condominium.

I have a friend who doesn’t have an issue with handling spiders, she will happily pick them up and dispose of them somewhere but goes berserk if a dog comes near her. Strange what fears and phobias can do. I don’t have a phobia about spiders, they don’t really bother me but I don’t want them on me. From time to time, I come across a little body of a deceased arachnid, on it’s back with it’s little legs curled in – I still can’t touch it, I depend on the hoover for that.

So why do I tolerate them if I don’t like them – because I dislike disease carrying flies even more. I have actually rescued a butterfly and a daddy-longlegs (crane-fly) from a web, which although commendable may not have been the wisest thing to do since the butterfly’s larva could have been responsible for chewing half my plants and the daddy-longlegs is more than likely be food on something else’s plate shortly after being given it’s freedom.

We often see the Harvestman spider with it’s tiny body and long, long thin legs in the garden.  At this time of year, there are webs wherever you go, stretched across everything and anything and if you are not on the look-out for them, they tickle like mad if you walk into them. Thankfully the spider belonging to it is more likely to be more afraid of you than you are of it, although you may find that hard to believe.

The one appearing in my 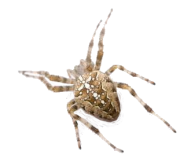 garden at the moment is the European Garden Spider. There is nothing delicate about it. It sits in the middle of the web, looking threatening enough and probably the Arachnologists will be the only people to think they are incredibly beautiful. Although when you see it as a photograph, I have to admit, it’s markings are exquisite – just don’t let it move.