If there is such a thing as weather gremlins, I have them. I don’t want them but they appear just when you think things are going well. Strong winds and torrential rain have left the garden looking quite sorry for itself.

I have a plum tree in a pot but the wind was strong enough to blow it over, now I don’t think it can face winter unless I put it in a much bigger pot.

At the end of the tomato season, when the last tomato was harvested and the pots emptied, it was time to clean out the hydroponic tank. There are still a few gallons of water in it but it doesn’t go to waste, having been constantly stoked up with feed, it can be used to water other plants so no need to throw it out. Instead I added the excess to the water butt. The tank is fairly clean anyway with only a small amount of compost used to start off the seedlings clinging to the roots but are then are potted on into rockwool blocks so very little gets even near the tank. The easiest way to wash the tank is to take it into the house and wash it in the bath. One small snail had gone unnoticed and is unlikely to have survived a hot shower. 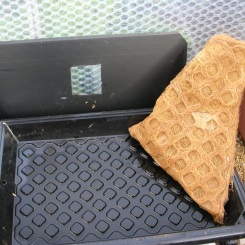 In previous years the roots were a much thicker mat than this year, yet this year I had better results with quantity and size.

I grew Matina tomatoes in a pot and in the tank and didn’t notice much difference in taste but the ones in the tank were much bigger. I didn’t find Matina such a good flavour but comparing it with Shirley and Gardener’s Delight is perhaps a disadvantage.

To begin with, I thought foolishly that the tank once filled could be left to it’s own devices but I very soon learned it’s not the tank which controls the water level, it’s the plants so topping up the tank at the height of the season was a daily task. Liquid feed gets added at the same time, in ratio to the water. There is a constant movement of water thanks to an electric pump.

Now that it’s clean, it can be stored away for next year, leaving the space to make room for other plants. Oca and yacon need to be moved into the greenhouse before the frosts.