What a sorry state my garden is in now. The warmer autumn we had, didn’t really add much to the harvest of the summer and what little there has been has been killed off by the frost.

It also didn’t give me time to get prepared for the winter season’s planting although in spite of some of the vegetables looking a little woe-begone, there are signs of new life. Collards are a colder weather vegetable, they are a bit like spring greens. The Florence Fennel, Romanesco looked as if it was ready to give up the ghost as I was very late in planting them all but again in spite of it’s floppy appearance, there are signs of new growth.

The Snowball turnip and Komatsuna Japanese Green Boy both fell foul of slugs and snails so even more delighted to see them making a big effort to survive.

The greenhouse is looking more like a place of no return. It still has several plants in it from the summer season but added to that the Wonderberry has totally run over it’s season and is still in flower and producing berries. They apparently don’t like frost and are considered annuals. It’s in an unheated greenhouse but may not realise it’s winter yet. I’m almost tempted to put the heat lamp/light on over it to let it live out it’s little life as it should. 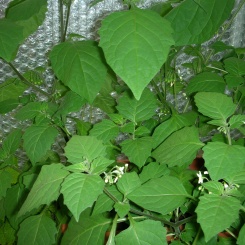 Something else in fruit and only spotted a couple of days ago, is a strawberry. I’ve taken it into the greenhouse for a little bit of shelter but it is unlikely it will turn red now. The other fruiting strawberry is a little Alpine plant. 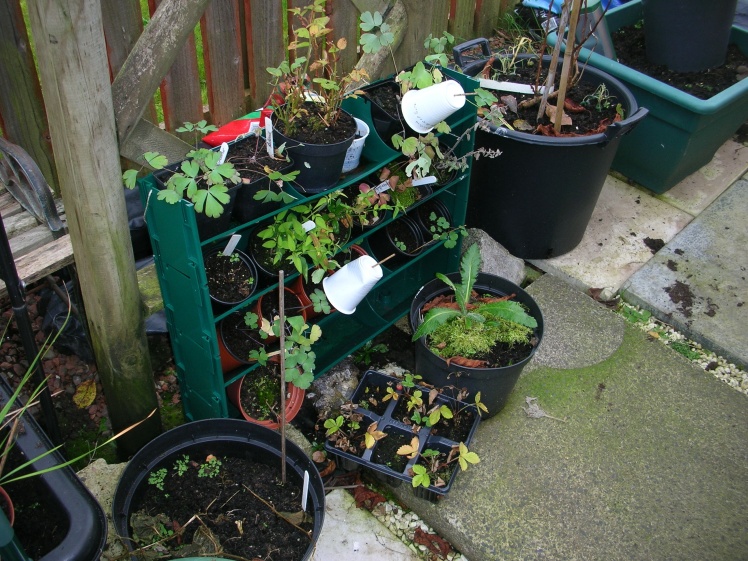 I was given a set of three Vertical Wall planters as a gift and although the intention should be to attach them to the shed wall, I am using the legs of the rustic arch to attach them to meantime. They will be more useful in the spring when the little plantlets will be ready to make their own way in life but will still get a bit of added protection. I had a number of little plant pots which fit in nicely to the sections and hopefully will protect them from blowing away when it gets windy.

It’s debatable now whether it’s worth having a big clean up at the moment. I have a lot more mess to make yet. The crocosmia, Lucifer has still to die down yet but I have removed the hosta from the side of the pond. It may come back, we couldn’t get a lot of it’s roots out but the gap will be replaced by a paving slab, so that other plants in pots can be put there to ring the changes and keeping everything in pots will make the changes easy.

Another job for early spring, is splitting the pond lily but I will need to be quick, by February, the frogs will have mated and the pond will be full of spawn. I’d feel guilty at disturbing them but if I wait, it will be into the summer before the little froggy kin 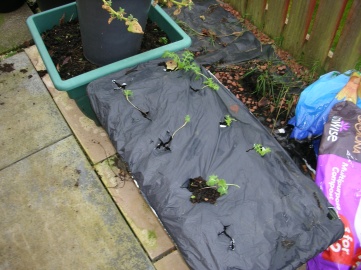 The Mizuna was almost devasted by slugs and snails, so in the interest of giving everything a chance, I popped their limp little stems in the Earthbox and noticed today, new growth even for them. I’ll need to wait until the leaves are a bit bigger to find out what else I’ve planted in it.

Although I’m not quite finished harvesting the produce yet, it’s hardly survival rations. I’ve probably had about enough to feed one person for a couple of days but just a short time ago, I’d never heard of some of the things I’ve grown. The yacón, was harvested, and although quite tasteless at the time, has been left in the box for a few weeks and they have definitely sweetened.

Oca is something else I had never heard of and when I hear others mention it, I feel as if I’m the only person in the world not to have tasted it. When you plant them they are like little pink grubs, but my little grubs didn’t put much effort into their growth. I emptied the bigger potato bag with them in it a few days ago and there were only a few big enough to be of use. With the mass of greenery it produced, I expected more from the plants. I have another smaller plant pot of them and it’s now in the greenhouse. I would think I have plenty of little tubers big enough to start them off again.

Oca, Some of the harvest

You can cook them but I’ve only had a bite of them raw and they have a very sharp lemon flavour. I decided I didn’t have room to grow them again, but they are interesting so I will put my thinking cap on to find a way of fitting them in. I will be planting some new vegetables next spring and if they are going to be as interesting as those I’ve had this year, I will have a lot to look forward to.