Telling time is common with many plants whether it’s petals or leaves opening up in the morning and closing at night, although not in the way humans do, they know the times and seasons. Sunflowers are known to follow the sun, at daybreak, they face east, and with the setting sun, face west. During the night it’s head swings back to the east ready to face another day but once the flower bud opens they stop tracking the sun. 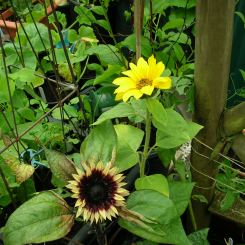 Perhaps not many people know the truth behind the sunflower which lies in ancient history of Greek mythology. Clytie, a water nymph, fell in love with Helios, the sun god. Clytie sadly was ignored in favour of another woman so she spent her days following Helios as he rode his chariot across the sky. After nine days of not eating or drinking, whilst watching his daily trip across the sky, she became rooted to the ground and transformed into a sunflower.

The next time you stop to admire a sunflower, give a little thought to Clytie.