The part of the garden I usually allow to grow without too much interference, has a little pond, no bigger than a corner bath but frogs like it. It usually has a good helping of duckweed covering it but now and again, I scoop that up to use as compost. It makes excellent green manure. I do have to leave it on the side of the pond for a while, to allow any aquatic wildlife to return to the pond.

After using slug pellets and realising too late they would ultimately poison the frogs I was afraid I had lost all of my slug-eating little helpers. I still feel so guilty about it, but recently noticed something slipping into the pond again – so no more slug pellets and frogs can relax in their own little haven with that assurance. I was concentrating too much on seeing what was in the pond that I almost didn’t notice the white water lily in flower.

Earlier in the year I took part in a plant exchange with fellow gardeners and was given amongst other things, Aquatic Mint. There wasn’t really any room to plant it, but I don’t like refusing anything. Like many other mints, it does tend to get a bit invasive but then realised I had the perfect home for it, at least for this year. I have a frog fountain which hasn’t been used as a fountain for some time but it sits at the side of the pond as an ornament. There’s not a lot of chance of it drying out for long with our climate and the bowl would help contain the roots. The seeds might think differently. 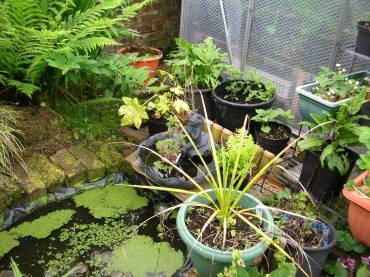 This little mint which some may consider a weed, can grow freely along river banks and although quite invasive, it has medicinal properties which no doubt folks in the past would know about. Cleaning wounds or in a balm, it probably soothed many an aching body. Cook with it, use it as a mouthwash or add it to salad. Tea made from it can aid digestion, calm ulcers, and be used to calm and refresh in potpourri and aromatherapy. Can we really do without this herb especially if we can use it to repel flies as a natural

pesticide? Like the flies, mice apparently don’t like it either so I am starting to like it even more. It doesn’t stop there though, add it to cleaning products in the home and there should not be a stuffy nose in the room.