It is such a joy to walk into the greenhouse and see flowers appearing on the plants for the first time. For so long now, the inside of the greenhouse has just been that – green. Now the seedlings are growing up and flower buds appearing, it’s time to make sure they get enough feed to supplement their energy into developing flowers into fruit.

The first to strike me was the little courgette, Midnight. Courgettes, like most of the cucurbit family are hungry feeders. Most of the others are showing buds but this one is the first to burst open.

The next flowers to open were the tomatoes, but now one truss has started to pop open, the rest will soon follow. 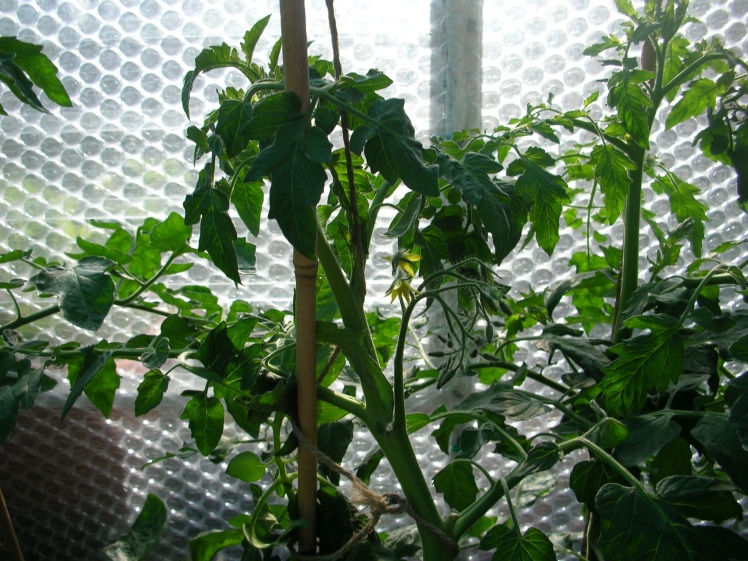 At long last the seedlings are starting to put a spurt on and show a bit more growth, which has been surprisingly slow this year. Whilst they do like the sun, they seem to look a lot happier in the humid warmth of the greenhouse and show a bit of lacklustre if the sun is constantly beating down on them. I did notice a difference in a previous year when I didn’t put shading up for some time and decided they were much happier in the sun but with shade.

Tree Spinach (Chenopodium giganteum) doesn’t need flowers to look impressive. Although I have some single plants potted up, there are a few remaining in the seed tray which will be a nice addition to the plate. The adult plant grows quite tall, up to about  about six feet and eventually lose the brilliant magenta-coloured leaves. They do produce flowers but so far the ones I’ve grown in the past, have never reached their full potential in either height or flower production. They cook like spinach but apparently contain oxalic acid so not suitable for cooking in an aluminium pan.

The small trays from the windowsill propagator are ideal for small space gardeners. This year I have been trying to use up as many seeds which have been left over from past sowings and the rate of germination of older seeds has really surprised me. The broccoli raab came from a seed swap last year and I still have plenty left over for a few more sowings. Both can be added to salads when young, so nothing is wasted.