One advantage of container gardening, is you can choose your neighbours. You would never think of plants being fussy about who their neighbours were, but it’s not just a case of making sure they are fed and watered, they may not always make good bedfellows.

Although most of my plants have their own containers, there are some who have to share. One container has kale (Nero), achocha and pot marigolds (calendula) but apparently marigolds are not supposed to be everyone’s friend and they don’t get on with peas and beans, mine do. I planted purple podded peas and dwarf curly kale along with marigolds, but their neighbouring container has garlic and although the garlic might be too close for comfort, the peas still did exceptionally well. 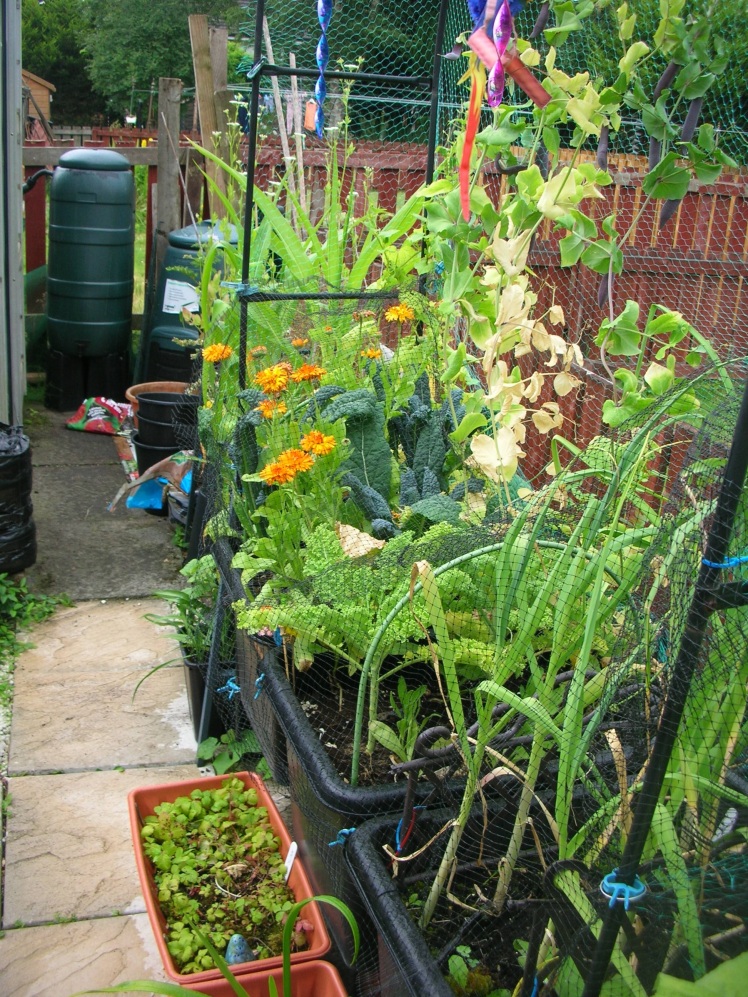 Karmazyn beans also did exceptionally well considering they had garlic and Egyptian walking onions close by. Not all companion planting charts fully agree with each other though. Nasturtiums haven’t made too good a display this year so far and are only just starting to flower. I had known about companion planting but only when I saw the gardens at a local Buddhist retreat, did I wonder how well it would work. Courgettes mingled with the calendula, looked the healthiest I’d ever seen. Nasturtiums in the greenhouse keeping tomatoes company. They may work in different ways though, but still make good companions. Nasturtiums probably won’t repel insects, but they could attract them away from other plants, so in that way are good neighbours to have. It might work, but I don’t normally have problems with unwelcome insects in the greenhouse, so for me it is difficult to tell.

Calendula is a colourful flower, which will be happy to invite nectar collectors and pollinators but they may not do so any more, other than bring them nearer to plants which perhaps don’t have such a ‘come and get me’ personality, so as a repellent, that’s not what they’re about. I had bronze fennel next to the greenhouse some years’ ago, and although it’s supposed to repel aphids, mine was covered in them! Any repellent plants I need are for slugs, snails and cats.

The unwelcome guest in the garden has to be bindweed (Convolvulus arvensis), I can think of no useful purpose for it unless it is a source of pollen or nectar, but as a neighbour, it is the neighbour from Hell. Quietly, it’s delicate tendrils coil round the unwary plants, it’s heart-shaped leaves and pretty flowers distracts from it’s evil intentions. It grows fast and those hugs from the tendrils gently, but quickly, draw branches and stems down to the ground, whilst it carries on like a party gone out of control, while it’s host is being slowly choked to death.

I cannot forget Kiwano, cucamelon or cucumber when I mention hugging. These three are very ‘huggy’ plants and will entwine themselves around anything in their way, so for that close attention, they would need to be very good friends indeed. Another plant I have which is growing well but shows no sign of fruiting, is the ivy gourd (Coccinia grandis). It makes a lovely trailing plant, another clingy plant but perhaps just a little less demanding although still friendly. They all differ from bindweed as their root system is not invasive or as relentless.

In a garden as small as mine, it’s difficult not to be someone’s companion and as long as the bees are happy, the plants can be as friendly as they like.

2 thoughts on “Neighbours From Hell”