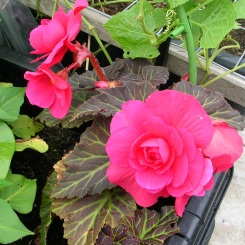 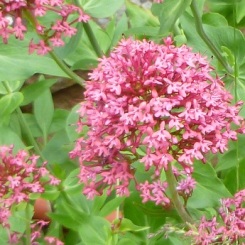 When I first thought of having a tropical look to the garden, I thought more of stunning, flamboyant blooms and colourful, oversized, leafy plants to brighten a dull corner, it never crossed my mind they would need to survive the monsoon season in near Arctic conditions.

I only hope that the long, hard winter has got our seasons a bit more into tune with what they should be like. Last year was certainly confusing with a mild spell in early spring, followed by a sudden, hard frost. Some plants which survived, didn’t fruit but I was pleased that I hadn’t lost them altogether. I don’t have room for a polytunnel unfortunately but it might be an answer.

It would appear that all the frost tolerant, tropical plants I bought, haven’t made it to spring. It’s a bit sad that the young palm trees waited until now to give up the ghost. It’s early days, and I don’t like giving up on plants until I am sure. However, there are plants I am absolutely certain of their demise when sadly, many were reduced to a mushy heap. Aloe aristata, (lacy aloe) was in an alpine trough but after the weather had it’s way with it, was almost unrecognisable. I dug it out and there hiding under it, was a single little plantlet, still green although scuffed round some of the edges. It’s a big responsibility for such a little plant, to carry on the genes of it’s late parent.

My first Aloe vera was a cutting, from a cutting of an Aloe vera in Arizona. It survived in the greenhouse for a few years, then it succumbed to severe frost and there was no going back, it was gone. I replaced it with a bought plant and it may have been inferior to my original, but it never gained the robustness and it too departed. I recently replaced it with a cheap plant from a famous store and it has several offshoots which I am planting up – just in case!