Having come to the conclusion that I am tomato intolerant, and not only can I not touch the plant but I can’t even enjoy the fruits without sending me into a painful, frenzied itching, and red blotches. I have also learned that a tomato intolerance could mean also being intolerant to latex. My first discovery of the latex allergy was Marigolds, not the flowers, they are innocent, but the washing-up gloves. I always bought the cheaper version until one day my hands and arms had turned a bright red, and oh boy, did they itch. The redness stopped in a fairly even, straight line round my arm, where the gloves had stopped, so that was a fairly easy conclusion to come to and after that, I bought vinyl gloves. I also bought disposable vinyl gloves for working in the greenhouse. They are short though, and unless I wore long sleeves, just touching the tomatoes brought back the red, itchy blotches. I made a mistake though, when ordering boxes of the vinyl gloves, I accidentally ordered a box of latex gloves. I hadn’t even realised it until the allergy hit me with a vengeance,

I have had to really look at what I will be growing in the future. I have already cleared out the cherry tomatoes and should be able to find homes for the larger tomatoes when ripe, but after that, I may not be able to grow them again. This brings me to the decision of what to grow in their place. I normally grow eight pots of tomatoes and three in the hydroponic tank. Eleven shoes are a lot to fill in the greenhouse. 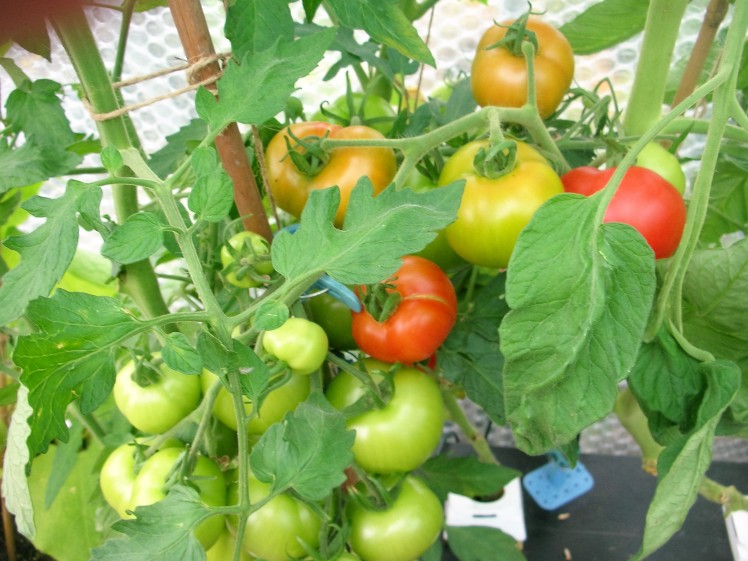 Tomatoes are by far the best plant to grow hydroponically. They take to it like a duck to water and produce plants with strong, healthy stems and plenty of fruit. Having removed all the cherry tomatoes from the greenhouse, the most prolific of the rest of them are the Shirley tomatoes, the big butch stems are needed to support the heavy trusses. Supporting the tomatoes has been a little bit of a problem for the tank. I have supports for the canes, but I also have to run rope across the greenhouse for strings to be attached to give them added support. Fortunately I had the Shirleys nearest the end of the greenhouse and there she rests, like a buxom lady after a night on the tiles. Resting against the corner of the greenhouse amongst the cables and canes, she just can’t straighten up. I defoliated the plants to cut down the risk of touching them and to allow more air and light to get into them.

The Black Russian tomato did not have such prolific growth, although it has done alright for itself. I’ve already removed most of the large fruit from Berner Rose, so it too is keeping its composure. Marglobe has already given up and its fruits have been a lot smaller than they should be, as is the Garden Peach.

The photograph above, shows the difference between hydroponic and pot-grown tomatoes. Even watered twice a day, the pot-grown tomatoes weren’t coping with the hot sun and thirst, and the skin on many tomatoes split due to the erratic drying out of the pots. The Shirley tomato is representative of most of the hydroponically-grown tomatoes and although variable in size, fewer showed signs of skin cracking.

I don’t really have a lot of choice of what to grow in a tank, strawberries do well but I would prefer something a bit more substantial. Bush beans are another option. Basils and cabbage take well to this system of growing but still not quite I want to grow. In the running at the moment are Pepinos, I am growing them at the moment but they haven’t fruited. They however, tick plenty of boxes. They are a small, tear-shaped fruit, more cold-tolerant and don’t require as much space as other melons. Described by the Spanish as sweet cucumbers, they could be an interesting alternative. There is a downside though, it’s a member of the Solanaceae family, as are egg-plants, potatoes and tomatoes.

There are so many plants related to the deadly nightshade family, I hope I don’t need to give them all up!