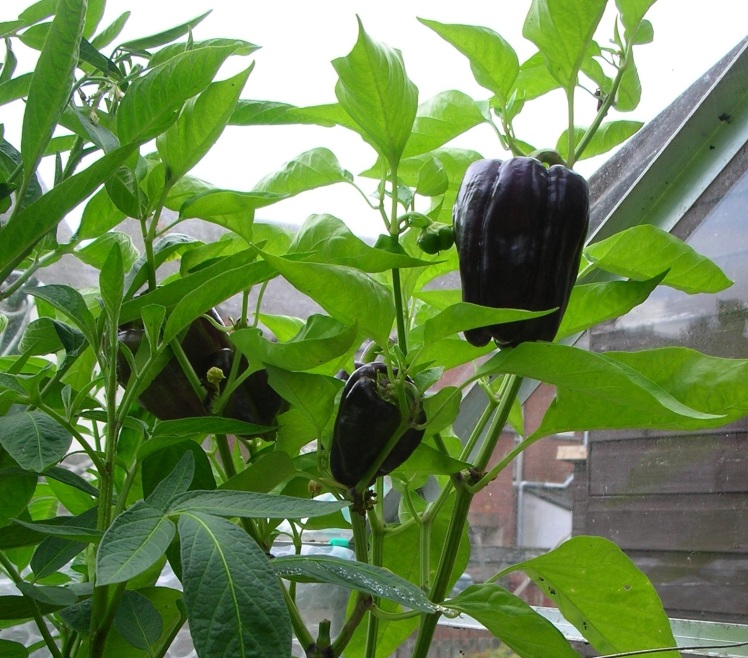 The Lilac Bell peppers are ripening up nicely and are an interesting, colourful addition to a salad, but I always feel that being a small space gardener doesn’t really produce great quantities of anything, except tomatoes. Tomatoes are my main crop and grow happily in the greenhouse. Happily for me at least. I know where they are and what they are doing, when they need water and they need feeding. Although they do have their own ups and downs, they along with cucumbers, seem to appreciate being a bit mollycoddled.

Courgettes grow fine outdoors but although they also are thirsty and ravenous feeders, they seem to tolerate the weather, leaving me with only the slugs and snails to deal with. I grew two different varieties this year (courgettes not slugs or snails), Midnight which are fairly standard shaped courgettes, and then you get the trombino, long and lean, with a milder flavour. The neck of the trombino is all meat, the seeds are in the bulbous bit at the end. 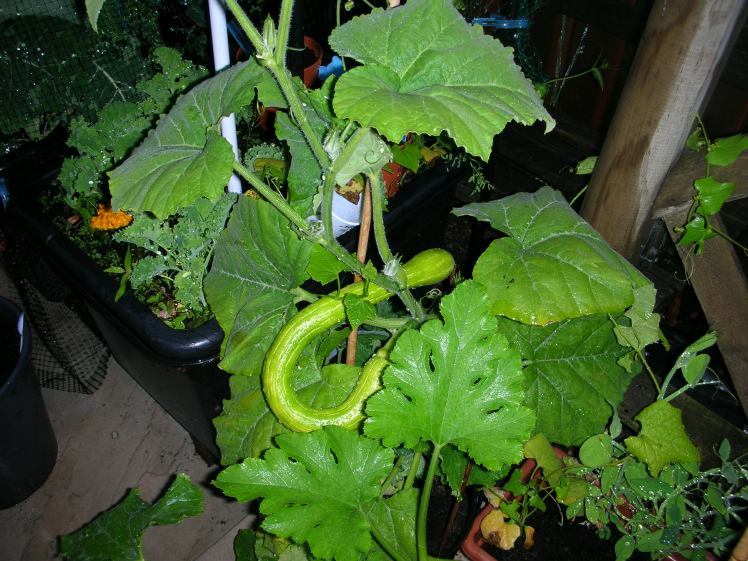 Cucamelon, seem very happy in the greenhouse, they wander unobtrusively all over, and can be found mingling with the tomatoes and other plants, leaving their little fruits dangling like a string of beads. The use of mesh shading has been a boon to the climbers although I did provide a series of ropes for them to grip, the netting has been the all-time favourite.

I have never been too successful at growing garlic, although in the past, I have used garlic cloves, which have been bought for culinary use and just stuck them in a pot, without having any idea how to grow them. This year I bought garlic bulbs from a garlic farm, and I have had my first real harvest of home-grown garlic. They are small though but I grew them myself, so it doesn’t matter if they are not likely to get a prize at the local flower show. I don’t force anything, I prefer to let the plants grow naturally without trying to develop them into something they are not. I was once given a prizewinning onion. It was huge, and the most tasteless onion I have ever had. How can anyone admire a vegetable based only on size? It doesn’t matter what it looks like but it does matter a great deal what it tastes like. 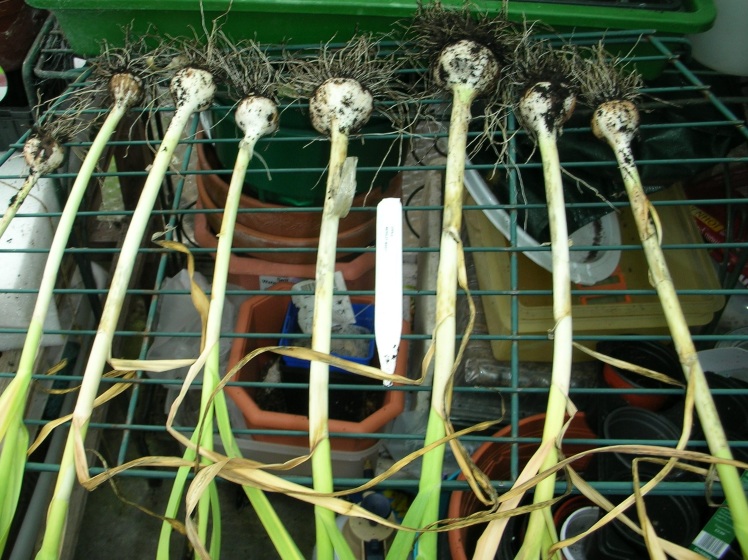 The Lemon Crystal Cucumber has done well this year, supplying plenty of little, round. mild-tasting fruits, easy to share when they are small, round and plentiful.

The last of my pink beans (Karmazyn), they were very tasty, nice to eat raw when young and nice to eat cooked when more mature.

The second flush of Purple-podded peas are every bit as good as the first harvest. I am just sorry I didn’t plant more of them. I am still waiting for Hurst Green Shaft peas to fill out. They were sown very late and I had more peas than I had room for, so I just threw what was left in the middle of a square pot to let them take their chances. Now I have a densely packed pot of peas. 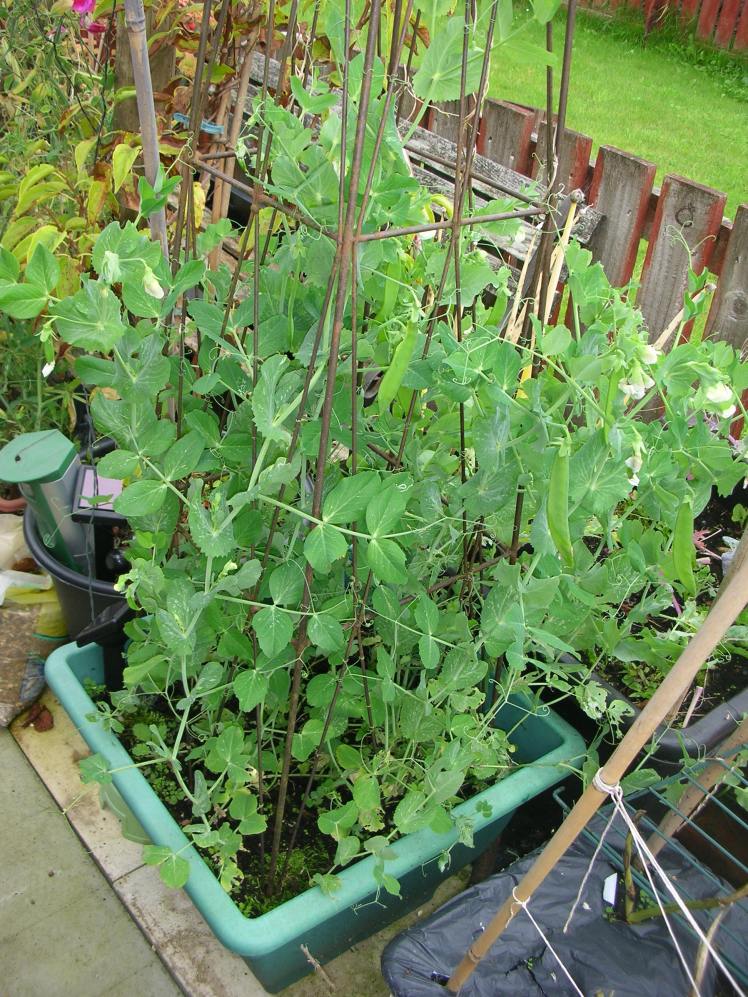 I only put a few achocha seeds in this year, I don’t need a big harvest of them and grow them out of interest. With a mild cucumber taste when raw or a green pepper taste if cooked, they find their way onto a plate or pot very easily. I grow it outdoors, whether it’s happy or not I can’t tell, but as well as going walkabout, it also stretches it’s little tendrils up the netting and produces sufficient fruits for my needs. 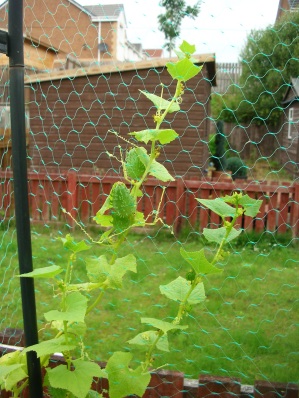 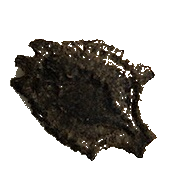 You never need to buy achocha seeds again, the large, black, flat seeds, resembling a squashed beetle can be saved to plant the following year.

2 thoughts on “A Taste Of Harvest”