With many people being too busy, or not interested in gardens, the space they used to call a garden is getting covered over with some form of easy-care material. During a conversation with a friend who is about to move house, and was asking if the new house had a big garden and the reply was ‘yes but it’s a pensioner’s garden’. That was a bit of a shock to some of my friends present at the time, who had opted to cover their garden with slabs, stones or slate chippings.

Some of us with small gardens who like growing produce, would like more space and for that reason, when an enthusiastic local amateur gardener decided to get land to have allotments, I thought this was ideal.

His choice of site was on farmland, complete with long grass, weeds, shrubs and an uphill climb. I had applied for a plot and because none of the land had been worked in recent years, I thought of the ‘no dig’ method.

I had recently used it to cover a difficult to access area in the front garden, so 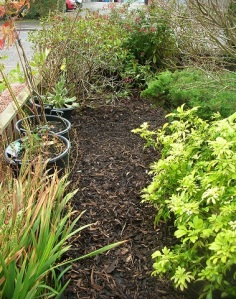 ideally I would cover the plot with cardboard, layer compost on top and let it lie all winter. In theory the land would be ready to plant by next spring. Sadly it didn’t work out and I said goodbye to the plot on a hill.

I would like to think the ‘no dig’ method would work in containers as well. For the past few years, I was emptying the spent compost into the compost bin, and either revitalising it again or putting new compost in the containers. I should be able to cover over the containers with cardboard and whatever mulch and fertiliser I can get and hope there would be enough nutrients back in the compost ready for new planting.

It eventually dawned on me, the Earthbox method is similar, you don’t need to replace the compost every year, you only add fresh fertiliser. I have grown vegetables in an Earthbox for several years, it has its own reservoir so doesn’t dry out quickly.

2 thoughts on “Allot Of Worry”