I grew Courgette, ‘Tondo Chiaro di Nizza’ about two years’ ago and it was delicious, so couldn’t resist growing it again. I tried Celtuce for about two years now and I have no idea where they disappeared to so I will try again. Sowing something new either for taste or curiosity will be grown again, if it succeeds in fulfilling the criteria.

I come across new plants sometimes through recommendation and sometimes by accident. ‘Kiwano’ (aka Jelly Melon) was a recommendation and now I grow it every year. My first attempt was too late in the season to sow it and they were harvested when still green. Last year I did get them to the yellow stage but still took a few weeks to fully ripen indoors. 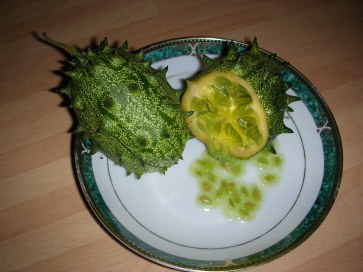 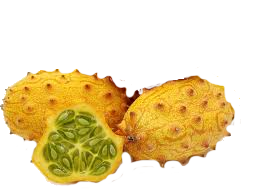 Carpsello ‘Scopatizzo Leccese’, a fuzzy little lookalike cucumber, apparently with a flavour similar to melon is one of the new kids on the block.

I also decided to try ‘Sikkim’ cucumber also known as rock melon. It looks interesting so I will see how this one grows as well.

I like the lemon cucumbers and they are still included in my regular growing list. However, curiosity and a liking for the unusual must surely have crossed the borders for unusual tomatoes with ‘Brad’s Atomic Grape Tomato’.

How can anyone with any sense of adventure, not want to try these little tomatoes? Apparently extraordinarily sweet and an assault on the senses according to the description in the seed catalogue.

For me, gardening is quite an adventure, even better if success is at the end of it.

2 thoughts on “A Little Daring”